Mason’s and Shimer’s emblems to tooled on to phone case.

Five (5) new projects getting ready for the “Command Center” aka. my work table. You know I often wonder if more than Patti and Delores read this?  Ooops and Rachel.  Brain fart, what can I say? #1 is a wallet for a gal on the West Coast Pati  G aka Turtlebug and she would like a turtle and a ladybug on her wallet for starters,#2 I was having a conversation with a gal who works at my local store when I come to utter my first words with this oh so stern looking gent who is obviously security personnel. Frankly with him at the door, that’s all they need! Psst I gotta tell you behind that seemingly Marine foundation he’s quite the gent! A cell phone case that is going to be to die for. All’s I’m saying is Mac, Android and Samsung Galaxy 5 owners you might want to see the phone that couldn’t be broken in the case Ronnie and I devised. #3 &4 are Chihuahua dog collars maybe for Toni and Jill I haven’t heard back from. Travis and Mike both are after arm rest/center consoles.  The Ram’s getting custom tooled leather visors for too. The Dodge Ram is a 1994 with a 12 valve Cummins  and 2014 Ford SUPER DUTY turbocharged diesel.  Personally, I love them both. I have a 1999 Dodge with the 24 valve noisiest Cummins made. Especially with 6″ smokestack coming out the back.

How to order a custom dog collar and beyond

Across Leather Studio inside look 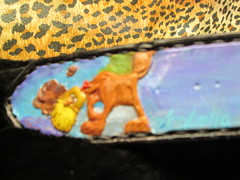 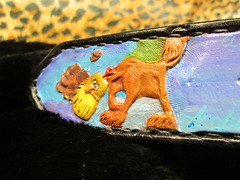 Dogs and their leather jewels